Reducing hunger by engaging
our community to create
access to food.
Volunteer Donate
541-343-2822

During the worst days of the COVID-19 pandemic, the Greater Baton Rouge Food Bank set up distribution events that drew up to 2,000 people to claim a bag of groceries.

Mike Manning, the food bank’s president and chief executive, says demand for food assistance spiked as the nation went into lockdown and jobs vanished. Once government supports kicked in and the economy got back on track, requests for aid ebbed, although not quite to pre-pandemic levels.

Early this year, the demand began to rise again. “We’re anticipating that we’re going to see the number of people coming to us for help continue to increase as gas prices stay high, as food prices continue to go up, utility costs continue to rise, etcetera,” says Manning. His organization assists 11 parishes in Southeastern Louisiana and works with dozens of partners, including Our Lady of the Lake Regional Medical Center, part of Franciscan Missionaries of Our Lady Health System. 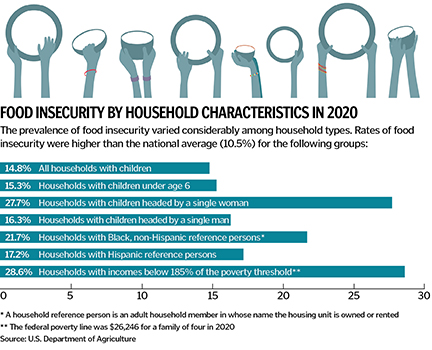 People who oversee food banks or meal programs elsewhere in the nation report a similar recent surge in requests for aid. They cite the rise in the cost of living — especially for housing and fuel — as well as the tapering off of pandemic assistance as drivers of the increased need.

Recovery undercut
Tom Mulhern is executive director of FOOD for Lane County, which is based in Eugene, Oregon, and counts Vancouver, Washington, based-PeaceHealth among its partners. He credits federal pandemic aid and policies, such as stimulus funds, increased Supplemental Nutritional Assistance Program benefits, rental assistance, unemployment benefit extensions and the eviction moratorium, with keeping the public health emergency from creating a wider social crisis.

“That was a success story that really hasn’t been told, I don’t think, to a great degree,” Mulhern says.

As the pandemic eases, that targeted assistance is vanishing or is expected to. Even if some of it stays in place, Mulhern says inflation is chipping away at the effects.

He notes that unlike other expenses, such as rent and car payments, food costs are flexible for most families. “They exercise that flexibility out of necessity and the end result is kind of substandard diets for many people, not because they’re not aware but because of economic reality,” he says. “They’re making the best choices they can given their economic situation.”

Get updates on our work: